"One of the finest evenings I have ever experienced in the world."

Join stars of Broadway, The Metropolitan Opera, and Bond Girl, Lana Wood, who portrayed Plenty O'Tool in Diamonds are Forever, in a glittering concert featuring the music of James Bond!

Immerse yourself in the thrilling music of grand opera with The Athenians as you tour the beautiful historic homes of New York's Five Boroughs!

These performances are free of charge and made possible through the generous sponsorship of Dame Jillian Sackler D.B.E. and Steinway & Sons 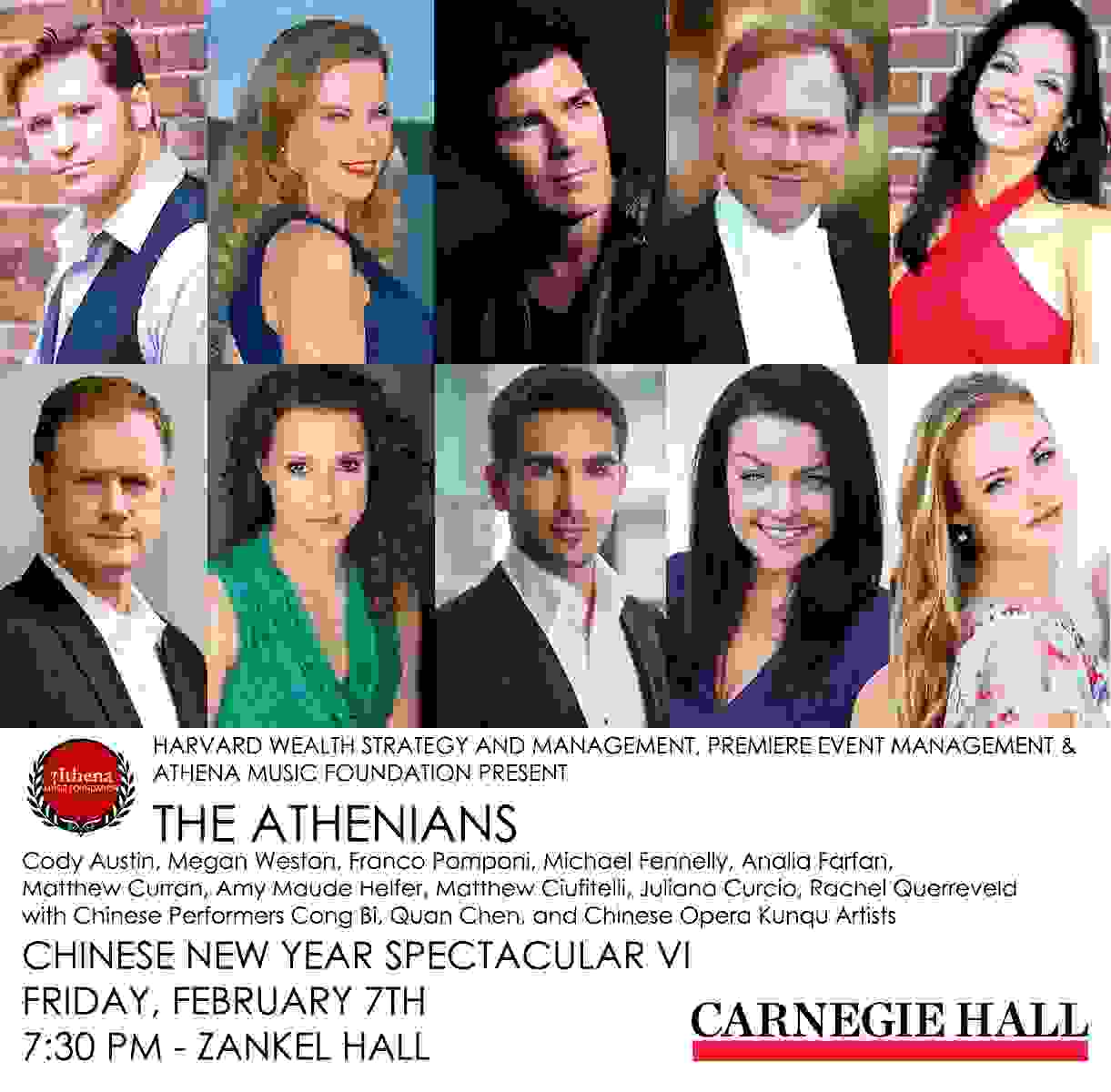 The Athenians AT CARNEGIE HALL - February 7th at 7:30PM

The Athenians are an ensemble of exceptional operatic soloists who have appeared in the world's leading opera houses, including the Metropolitan Opera, Teatro Colón,  Covent Garden, and Opéra de Monte-Carlo. The Athenians specialize in uniquely engaging and thrilling opera gala concerts, tours, and staged opera productions. This season, The Athenians appear at Carnegie Hall's Zankel Hall, Feinstein's/54 Below, and in our first annual Historic Homes Concert Series in NYC.

In June, Athena Music Foundation presents our first annual Historic Homes Concert Series generously sponsored by Steinway & Sons and a grant from Dame Jillian Sackler. Our first performance this season began with a concert  for the Lompoc Music Association featuring pianist Dr. Michael Fennelly and soprano Megan Weston. The program explored the music and history of the European Grand Tour.

We presented two performances at the Kosciuszko Foundation House in New York City. Metropolitan Opera tenor Gregory Lorenz performed a new arrangement by Michael Fennelly for string sextet of Six Songs from 'A Shropshire Lad' by George Butterworth, along with the Metamorphosis Chamber Orchestra in Arnold Schoenberg's intensely romantic Verklärte Nacht. Our season concluded with Soprello, a musical collaboration between soprano Allison Pohl and cellist Alistair MacRae, in a program that explored the connections between vibrating strings and the human voice.

Our 2018-2019 season began at Santa Brabara's historic Lobero Theatre with  soprano Megan Weston and pianist Michael Fennelly in The Paris Salon: Age of the Romantic Virtuoso. The duo performed the exhilarating and elegant music of the nineteenth century and offered illuminating insights on opera, the triumph of the international virtuoso, and importance of the salons of Paris.

Help Us Maintain Our Programs!

Please consider making a donation of any amount to Athena Music Foundation.  We are dedicated to our educational programs and to promoting classical music with passion and the highest artistic quality. Athena Music Foundation is a registered 501(c)(3) nonprofit charitable organization  (EIN 83-0589917). Your donation is tax-deductible to the full extent of the law.  Donate with your credit card or bank account via PayPal. Thank you!